TransferWise vs. CurrencyFair: Which is Better?

There are criticisms that may push you to do a little more research before you use one or either of the companies, but at the end of the day, there very few reasons why you shouldn’t use these companies to convert and transfer your money if you want to get the cheapest deal possible.

Simply put, you won’t likely find another solution that will allow you to transfer money abroad for so cheap. So if you don’t mind waiting a little extra time and/or you live in an area where these companies operate (they don’t operate in some of the bigger markets as of yet, which means it can be a pain trying to deposit money to the company), then we recommend you use either service.

Both are peer-to-peer transfer services, which is why they are able to offer such low rates. It is highly recommended that you do a little research into each company before you consider alternatives because there is a good chance they may offer you the best deal.

These methods are actually a fantastic way to move money from one country to another whilst paying tiny fees. Imagine you were working and getting paid in the US and you wanted to transfer money to your daughter in the UK. You could have your US dollars converted by a bank or transfer service and have it sent over with a bunch of fees and deductions. Or, you could call a friend in the UK and ask them to put money in your daughter’s account, on the condition that you put money in their account in the US.

Peer-to-peer transfers happen in a very similar fashion. Your money doesn’t move across to another country, you put your money into another person’s account, and they do the same in the destination country of your choice. They pay as much money as you pay into their account according to the exchange rate.

Obviously, the whole process is not as personal as the examples make it sound. The transfer services act as an intermediate that takes care of getting money from one so that it may be placed in another account.

What Each Service Offers

With TransferWise, sending and converting $1000 to Thai Baht will get you 31,257.35 Tha Baht, and with CurrencyFair, you get 31,491.50 Thai Baht, which means CurrencyFair offers a slightly better rate of exchange. In this conversion, you would get 234.15 baht more using CurrencyFair, which works out to be roughly $7.8 or .78%  difference in the exchange rate. Under 1% is pretty small, unless you are transferring a large sum of money.

This appears to be the case even with larger amounts. For example, if you use TransferWise to send $25,000, you get 21,826 Euros, but with CurrencyFair you get 21,956, which means you would get 130 Euros more with CurrencyFair. Despite this small discrepancy between them both, you still save between 80% and 90% compared to if you use the big banks.

TransferWise vs CurrencyFair – What is the Difference? 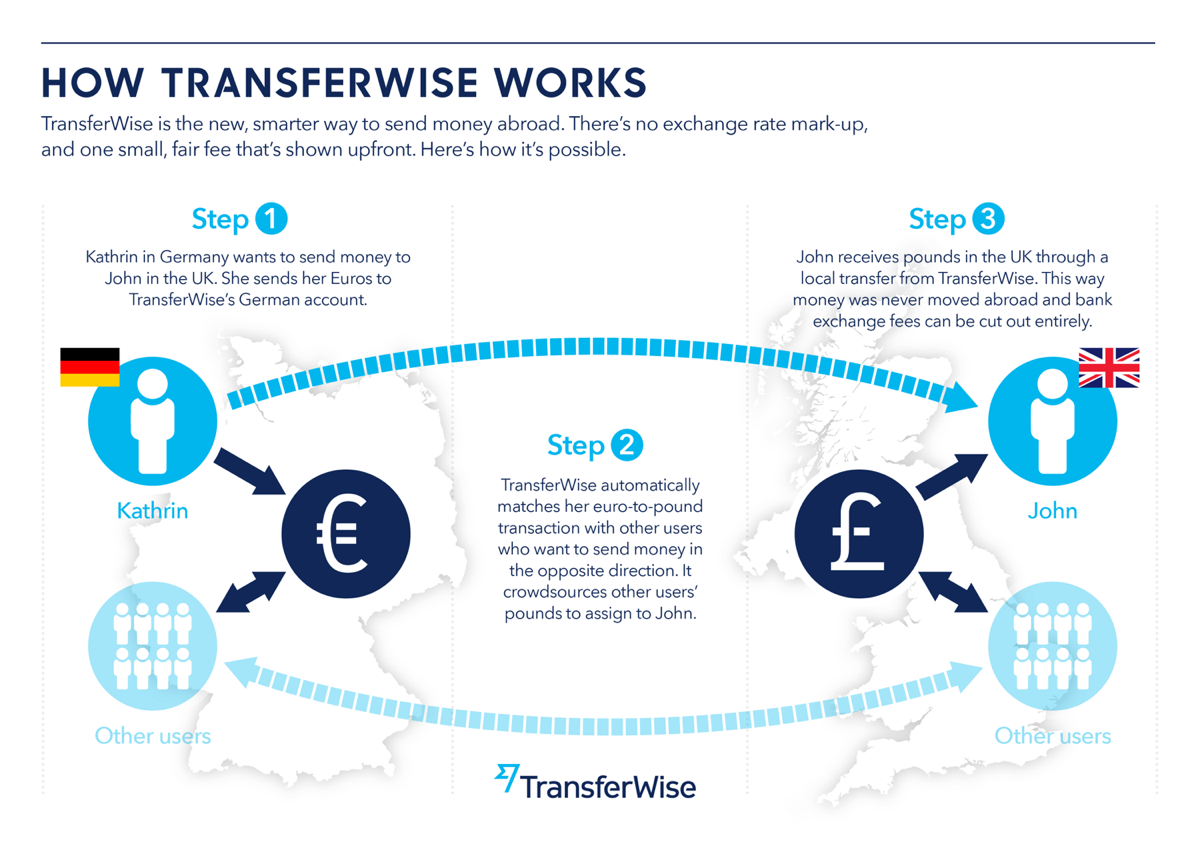 TransferWise offer rates that are very close to the market rate. This means they are not skimming very much from the exchange rate in an industry where such a practice is very common. With CurrencyFair, you have an opportunity to beat the market rate because it is a peer-to-peer transfer service where you have a little more control, so you can wait for a person at the other end to offer a rate that suits you. Make sure you read my comprehensive review of Transferwise (I’ve been using it personally to send money abroad).

CurrencyFair has a fixed-fee rate that is currently set so that no matter how much you transfer with TransferWise, you will still pay less with CurrencyFair. TransferWise seems to run more promotions and have more coupons, so it may be worth watching their offers to see if any catch your eye. There are not many differences between these two companies, but they are different compared to banks and credit unions that offer transfer abroad. Their prices are far cheaper because they are a peer-to-peer transfer group, plus working mostly online helps the companies save money on overheads, which means they can pass those savings on to the customers.

CurrencyFair charges you 3 Euros per transfer (no matter the amount) and the percentage rate you are charged is given depends on how many people are trying to transfer. The rate can range between 0 percent to half a percent. In comparison, Transferwise charges you half a percent (.005) of your transfer amount. If you say transfer 10,000, that will add up to $50. CurrencyFair would charge you 3 Euros AND you might be able to get less than the .005 rate if you are lucky, which could save you an additional $20 to $50.

Reasons Not To Use TransferWise or CurrencyFair

The only reason why you wouldn’t want to use either Service is that you want to save time and don’t mind getting a poor interest rate when transferring money abroad. Transferwise requires you to open up an account and wire money from your bank account to the Transferwise account in your home country. Once the transferwise bank has received the wire transfer into their account, they will then initiate the process to send you money. If you already have a wire transfer system in place and don’t mind spending 2-4% more in fees and exchange rate losses, then keep your current method.

CurrencyFair can make it more difficult to avoid fees at the other end. As previously mentioned, sometimes it is a case of picking the right account to receive the money in order to avoid receipt or withdrawal fees, and CurrencyFair makes that more difficult.

The CurrencyFair Company has also skimped on customer support. Their staff is sometimes rude and they clearly have a high staff turnover at their company because they appear to hire anyone.

There are some people that have to pay a pay-to-withdraw fee, and if you or your recipients are eligible for this fee, then it can feel like a betrayal and a hidden fee. The people affected are usually unaware of this extra fee for withdrawing their money, so it often comes as a nasty surprise–which is no way to do business.

And the biggest reason not to use CurrencyFair, in my opinion, is because they don’t support many countries. If you are in the US or Canada, for example, you can’t use CurrencyFair! (Update* Apparently they have now added support for USA payments)

Which is Cheaper: CurrencyFair or Transferwise

For most scenarios, CurrencyFair is slightly cheaper than transferwise. As we mentioned previously, you will notice around a .78% difference in price, however, this may change so you need to check current rates.

From my experience, I have used both services and I found Transferwise slightly better, even with the higher interest rate. With that being said, they are practically the same, so you can’t go wrong if you decide to go with CurrencyFair. I think I might be a little bit biased since I have used Transferwise more, which is why I feel that TransferWise is a better choice than CurrencyFair.

Between the two, I do use Transferwise, mainly due to the convenience and the fact that it’s available for me as a Canadian to use between Canada and Thailand (I can’t do the same with CurrencyFair which is not offered to Canadians at time of writing).

You simply accept the slightly higher fee and you initiate a transfer. CurrencyFair can give you a slightly better exchange rate and even a better one than you can find on the market, but you may have to wait a while before you get it. The wait is a couple of days to a week or more.

Note that I’ve personally used them to transfer over 23,000 USD to Thailand a few months ago and it went smooth as silk and I saved nearly 1,000 USD vs if I sent the money via my bank. It took about 5-6 days.

Overall, I feel CurrencyFair is a better company that doesn’t work so hard to engineer its online, and it costs less to transfer money using them. However, Transferwise is a more funded company (backed by the likes of Richard Branson), has a better interface, more staff, and converts to MORE currencies and countries than CurrencyFair. On that note, Transferwise is better. For example, I was unable to use CurrencyFair to transfer from Canada to Thailand, because they don’t do transfers into Thai Baht. Transferwise does.

So here’s what I feel:

As such, for most people and for most uses, Transferwise wins by virtue of being offered in far more countries (you can use it in Europe, Australia, UK, Canada, the US, and many more countries). CurrencyFair is only available in Europe and Australia. If I was sending large, large sums abroad, I would opt for CurrencyFair though, just to save a bit more with a slightly better conversion.

What do I use? Well, I use Transferwise right now and it’s what I recommend unless you live in a country where CurrencyFair is supported and you want to squeeze out the very cheapest rate and are willing to wait longer for transfer times. For the majority of people looking to transfer money, Transferwise is the best choice.

Ben was a seriously broke graduate student with bad credit who after finding himself rejected for any sort of credit card or loan for most of his adult life, finally decided to get his financial life in order. ' He spent several years reading as many financial advice books and blogs as he could. And suprisingly, Ben found he actually LIKED the topic of personal finance; after fixing his own finances, starting his own successful work at home website business, and using his earnings to get out of debt, created echeck.org to help others do likewise!

What Are Peer-to-Peer Payments? PayPal, Venmo, Square Cash And Others

What is a ACH Check Conversion?

This site uses Akismet to reduce spam. Learn how your comment data is processed.